Investor guide
This project offers a 9% annual preferred return, beginning 365 days after the proceeds of this offering are invested, with an anticipated return of equity upon refinancing after five years. If all goes well investing $1,000 will get you $1,450 back over five years, including your initial investment.

The funds raised through this offering will be used to build the Bungalow Gardens Project, which will provide eight rental units to house formerly homeless individuals. This award-wining project complies with all current zoning and is ready to break ground. Because of the project’s design and financing innovations, it was recognized in January 2019 as a winner of the Los Angeles County Housing Innovation Challenge and received an award of $500,000. The project has also secured a 15-year rental subsidy to help house individuals experiencing homelessness.

For more detail, read on. 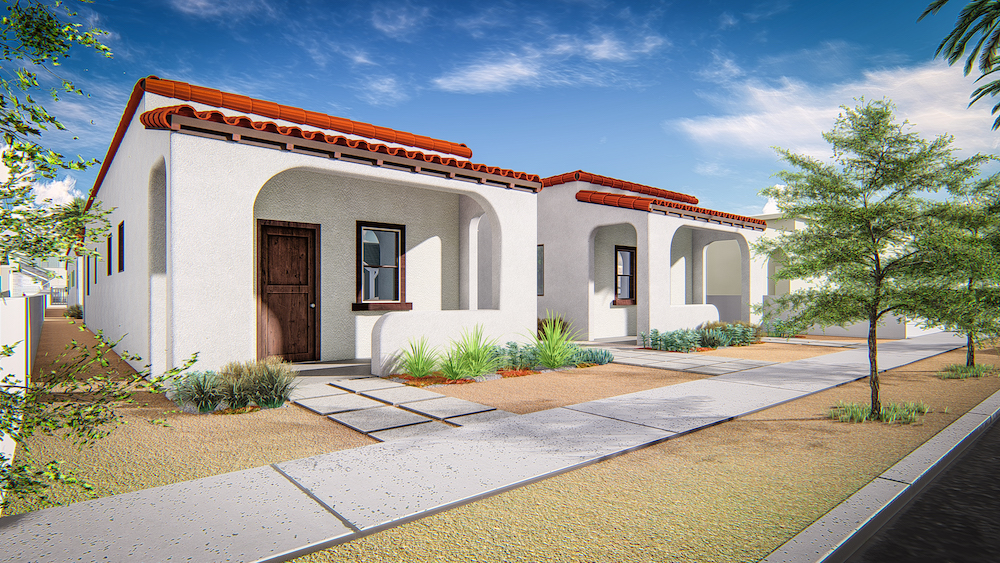 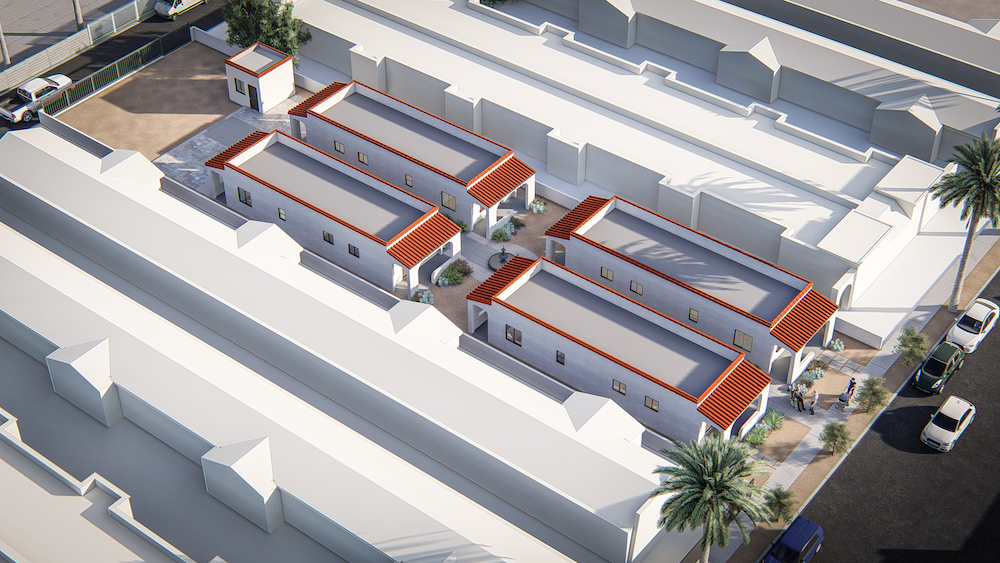 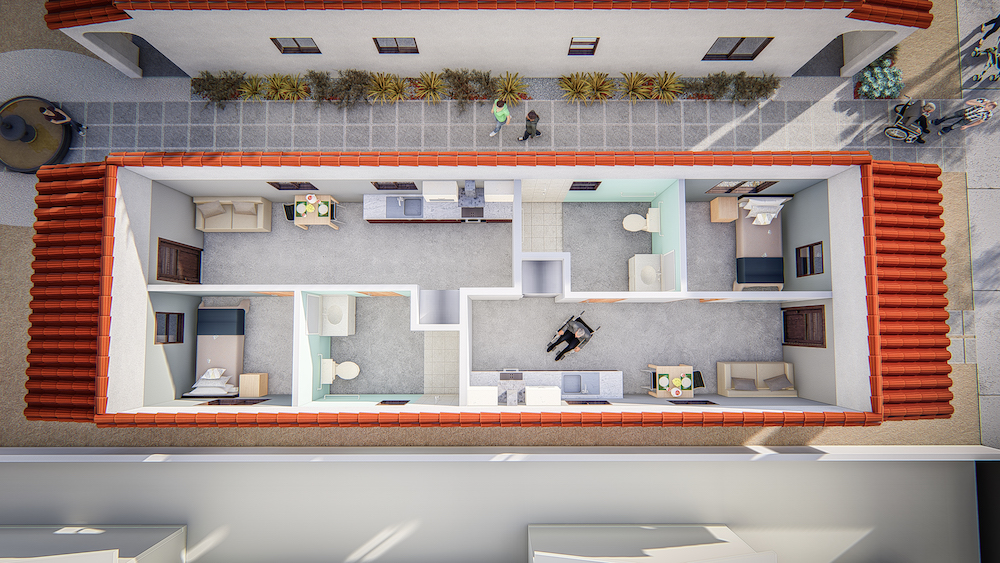 Restore Neighborhoods LA (RNLA) will act as both the developer of the project and manager of the issuing entity, South Central Bungalow Gardens, LLC (“Bungalow Gardens”), an entity wholly owned by RNLA. The developer plans to build eight units on a vacant lot in South Los Angeles and will rent these units to formerly homeless individuals. The development site, which RNLA currently owns, is 9,300 square feet, located at 920-922 W 81st Street.

The site will be developed with four one-bedroom units and four studio units, arranged in four free-standing duplex structures, designed around a common courtyard. Each unit is planned to be approximately 345 square feet in size. These compact and dignified small homes are inspired by the bungalow court housing typology that was the predominant form of multi-family housing in Southern California from the 1900s through the 1920s.

Because of the project’s design and financing innovations, Bungalow Gardens was recognized in January 2019 as a winner of the Los Angeles County Housing Innovation Challenge. The project will take advantage of the newly enacted Transit Oriented Communities Affordable Housing Incentive Program (TOC Program) which allows reduced on-site parking for projects located near high-quality transit. Bicycle and car parking will be located at the rear of the property adjacent to an alley.

No entitlements or other discretionary zoning actions are needed to build Bungalow Gardens. (You can download the Permit and Inspection Report here.) The project will use the Housing Innovation Challenge funds for construction and acquisition costs. Rental income for the project is provided by a committed and long-term rental subsidy secured from the county health services agency, and this subsidy guarantees monthly rent payments for five years. This rent guarantee is contained in a in a letter dated June 25, 2018. Due to extremely high demand, the County is actively seeking new property owners to participate in the Flexible Housing Subsidy Program. According to Brilliant Corners, the non-profit entity providing tenant screening/selection and property management for the program, there is a wait list of several hundred residents.

The anticipated total project cost is $1,468,018, which includes $734,734 in construction costs, $270,159 in soft costs, $363,875 in acquisition costs and $99,250 in financing costs. Financing will be provided through this offering and will be combined with a project loan of $868,018 that has already been approved by a local Community Development Finance Institution with whom RNLA has completed many recent housing projects. The project loan is both a construction and permanent loan. The equity raised through this offering, combined with the $500,000 grant from the county will make up the remainder of the financing necessary to complete the project.

The one-bedroom units at Bungalow Gardens have an initial rent of $1,522 per month and rents for the studio units for the first year are $1,273. Project rents are expected to increase annually as determined by the rental rates set by the United States Department of Housing and Urban Development (HUD).

Tenants for the project will be placed into Bungalow Gardens using the Los Angeles Coordinated Entry System (CES), a countywide system that identifies individuals in need of housing and services and connects them to available housing resources and services that best fit their needs.  Licensed and certified Intensive Case Management Services (ICMS) providers will provide onsite wraparound supportive social services to all tenants at Bungalow Gardens. 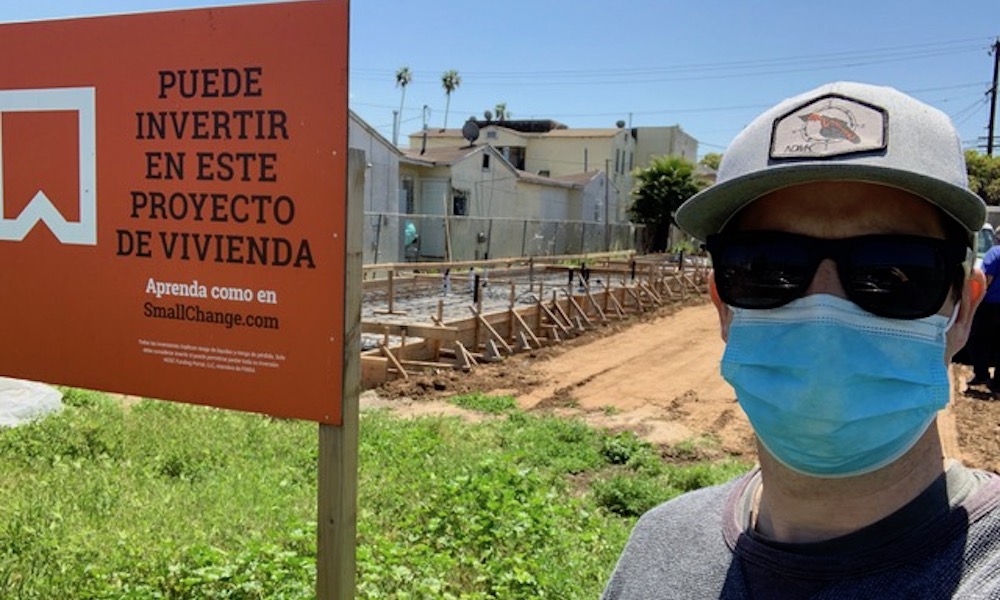 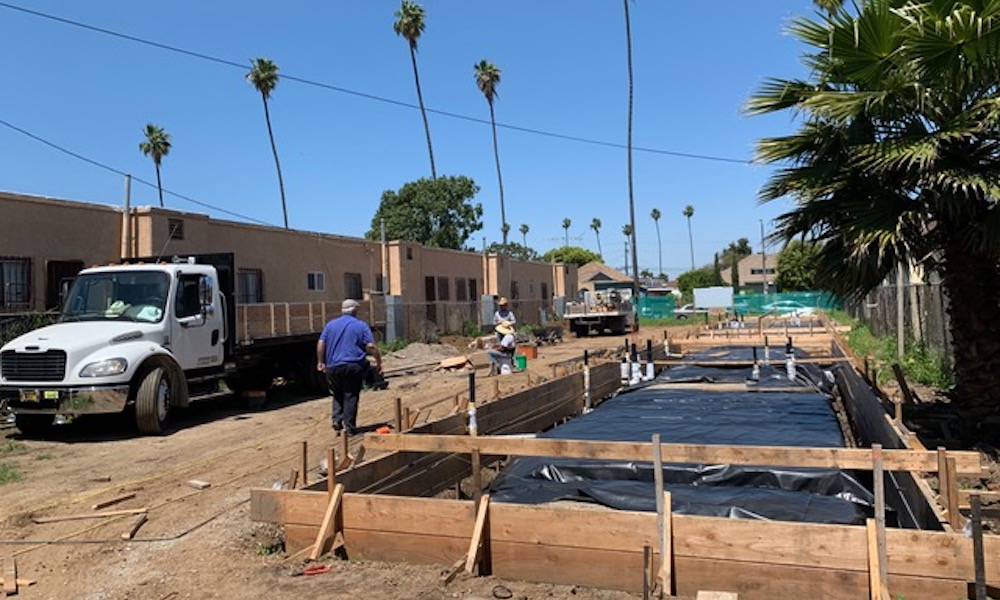 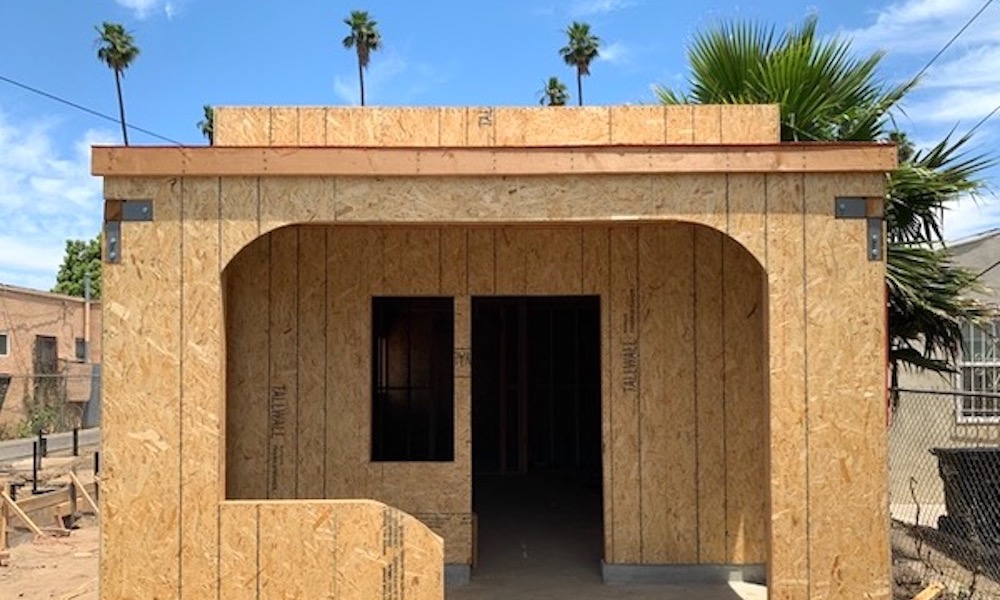 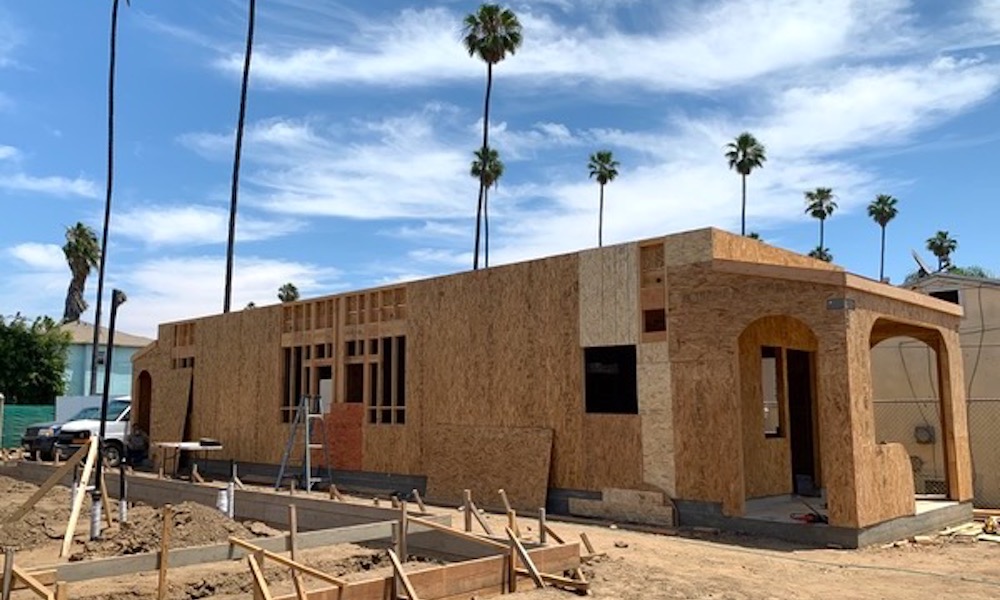 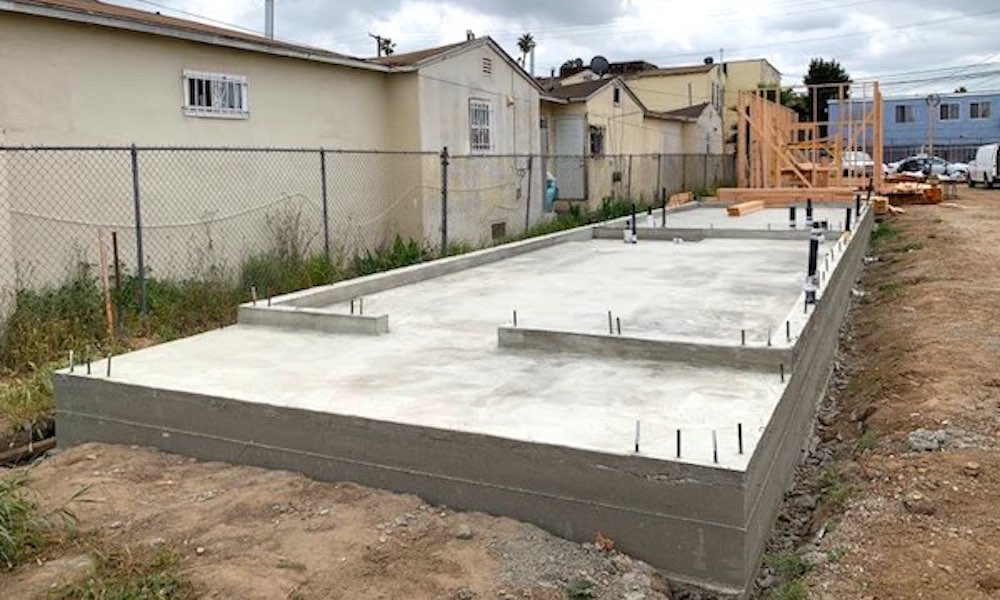 Previous Next
Show More Show Less
About the change 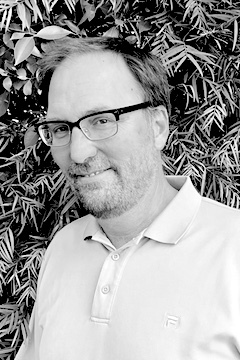 Restore Neighborhoods LA, Inc. (RNLA) is an infill development nonprofit organization based in Los Angeles that has facilitated housing investment of more than $140 million into local Los Angeles neighborhoods and has created 800+ new affordable residential units. John Perfitt is the Executive Director of RNLA and is a community development 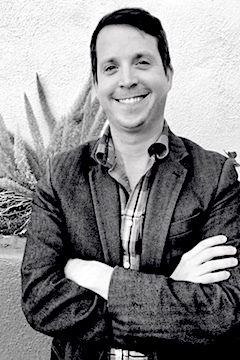 professional with 25+ years of experience leading economic development and affordable housing projects for public, private and nonprofit organizations. John has previously served as Director of Economic Development for the City of Downey; Senior Project Manager of the Community Redevelopment Agency of Los Angeles and was lead administrator for the City of Los Angeles’ Neighborhood Stabilization Program which created hundreds of new affordable housing units in high-foreclosure neighborhoods of Los Angeles. For the last 14 years, John has been an adjunct professor of Economic Development Finance at the University of Southern California Sol Price School of Public Policy.

Jason Neville will serve as project manager on the Bungalow Gardens project. Jason is a redevelopment and planning professional with 12 years of experience in public and private sector redevelopment. Jason has worked for the Los Angeles and New Orleans Redevelopment Agencies, Los Angeles Mayor Eric Garcetti, and founded a residential real estate development company in New Orleans which has developed 14 units of housing valued at $3.3M.  He is currently CEO of Building Blocks, a turnkey accessory dwelling unit design-build firm in Los Angeles. 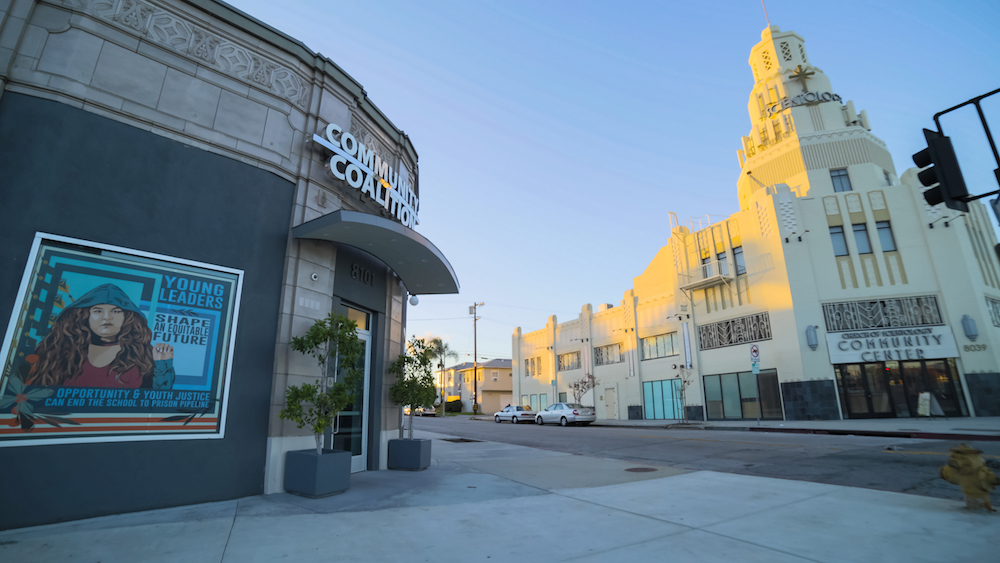 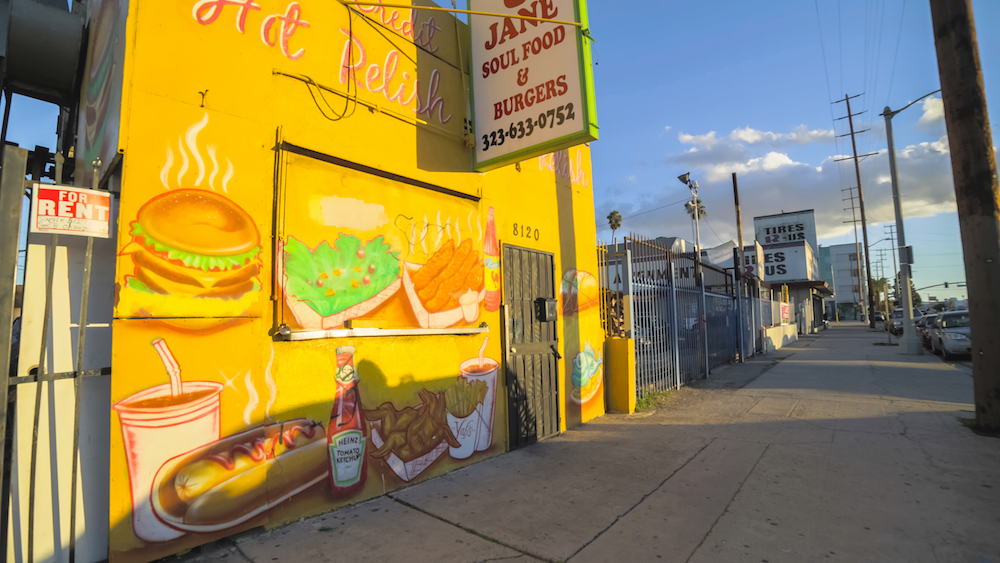 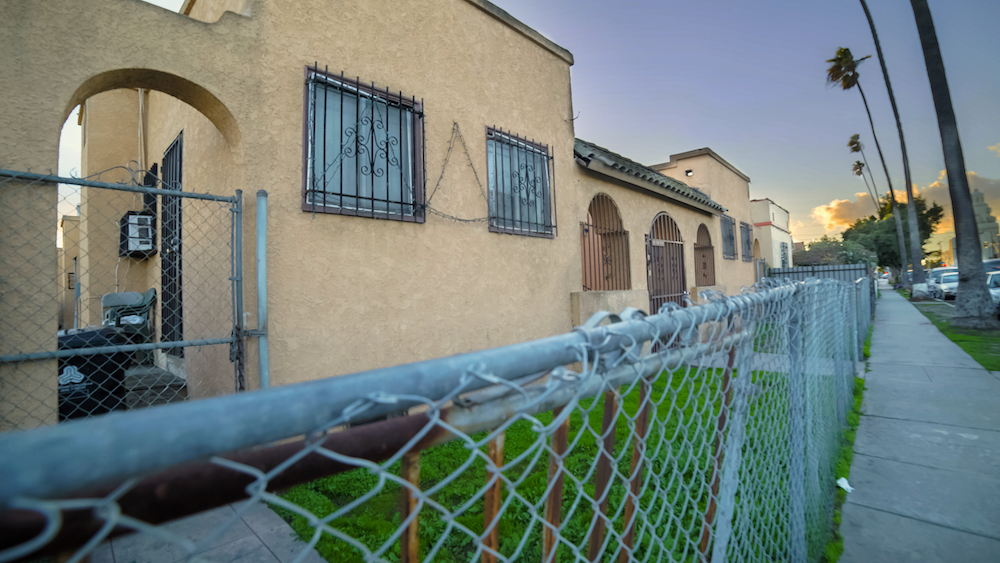 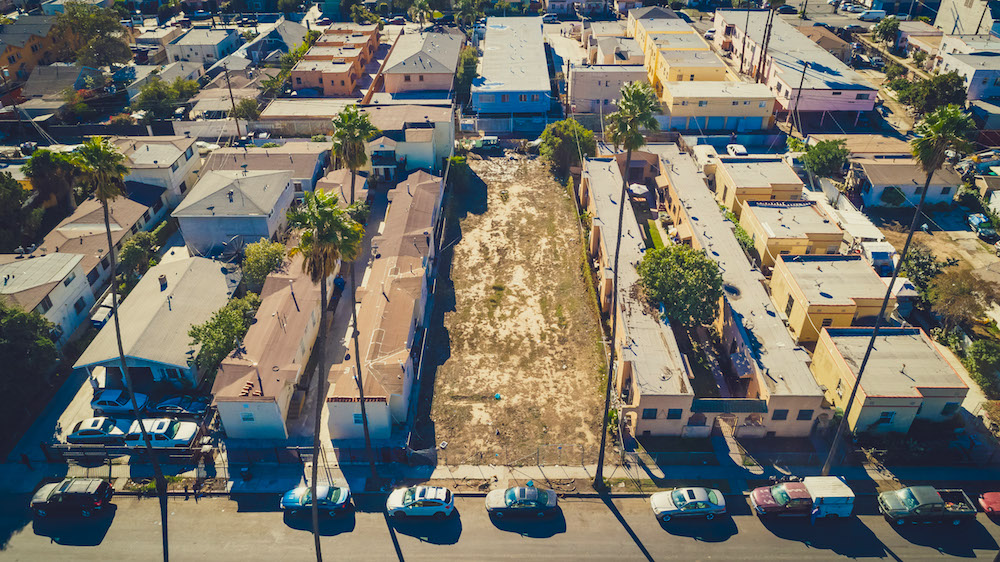 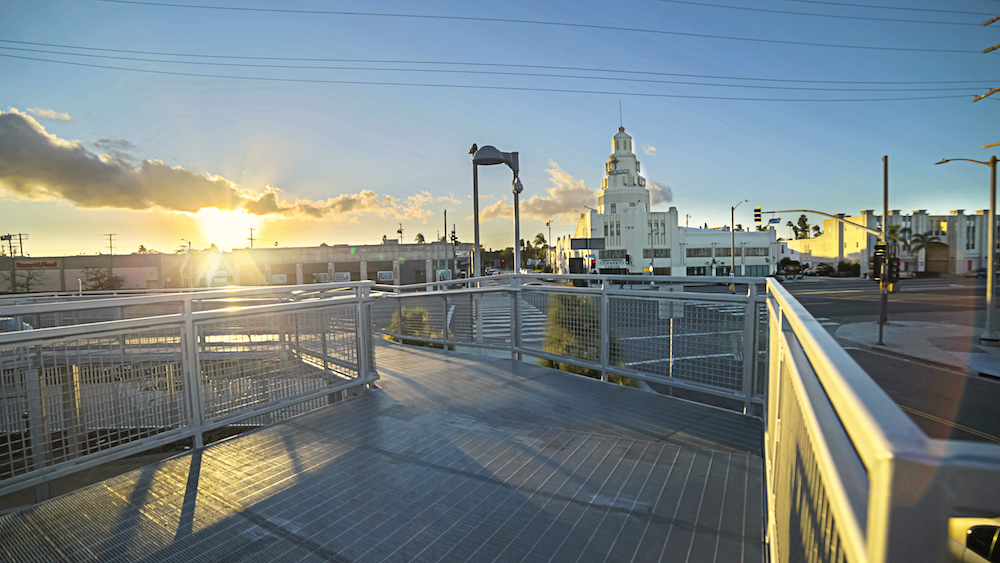 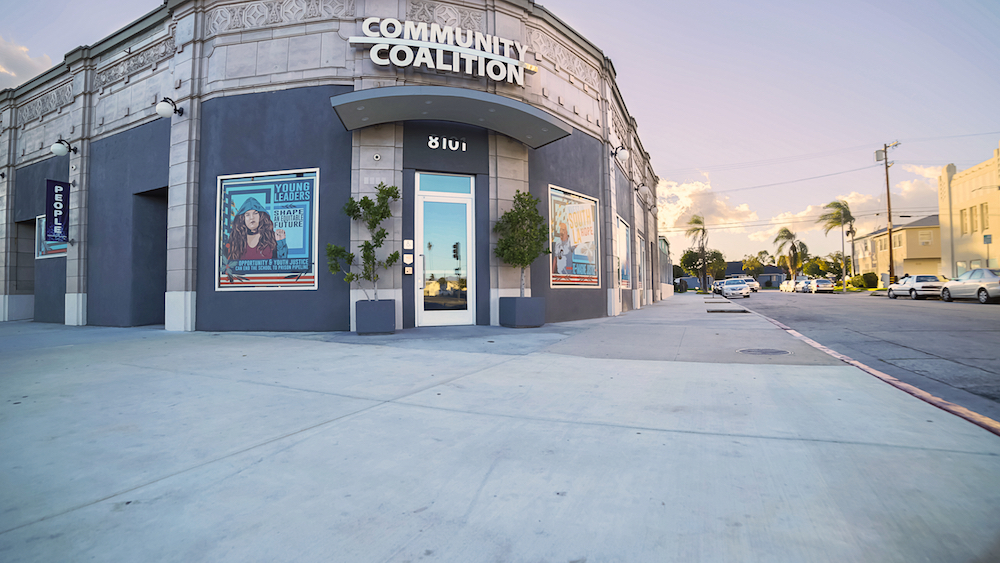 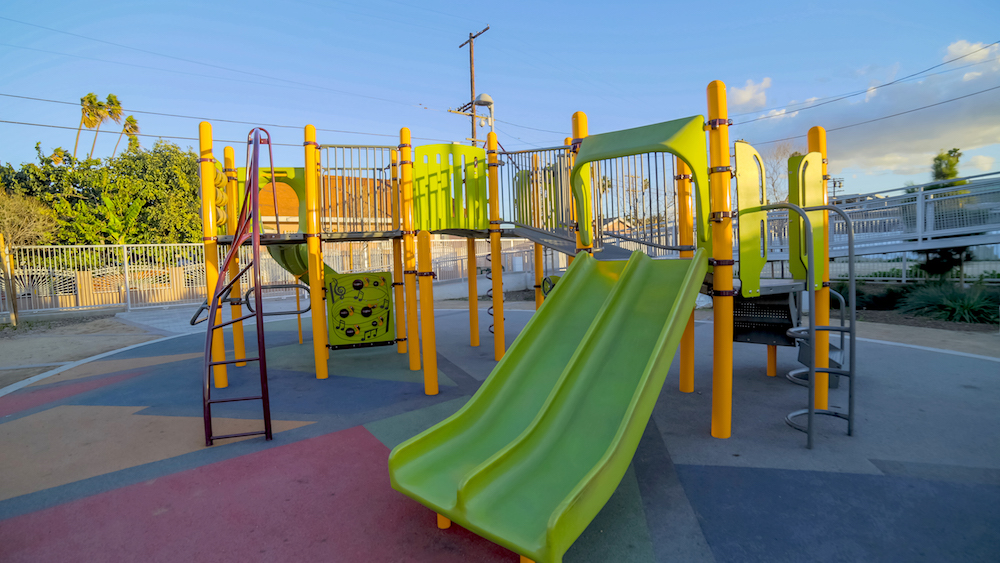 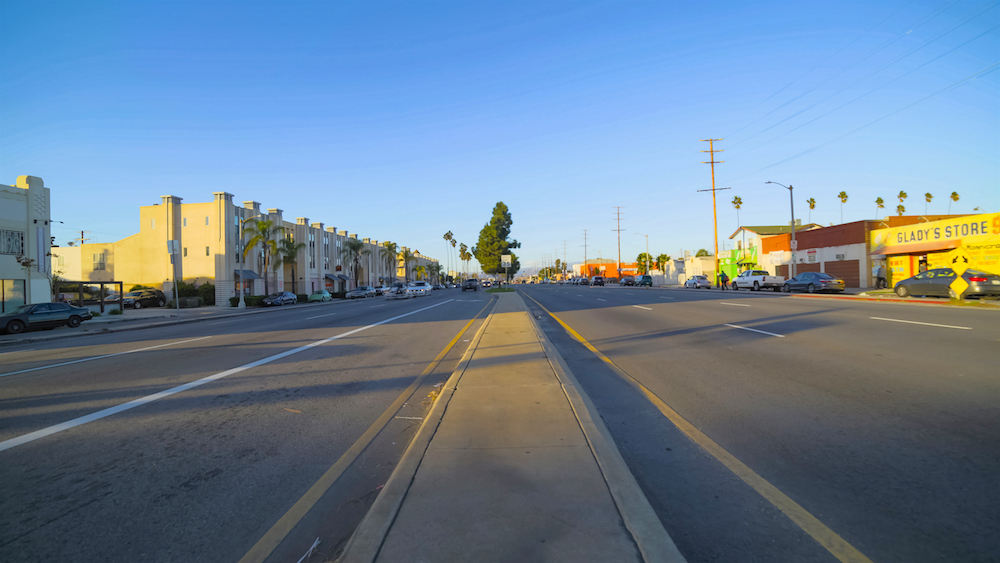 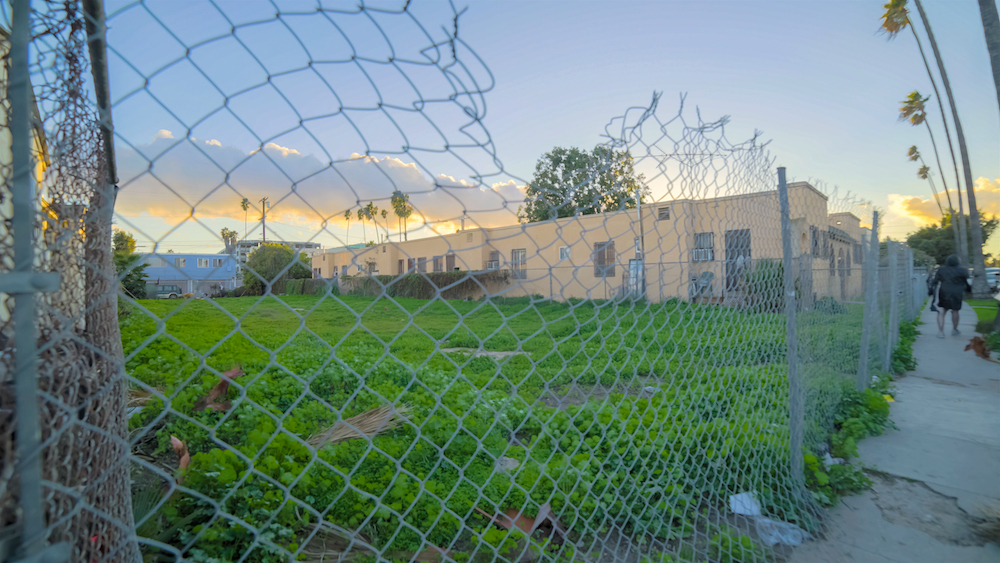 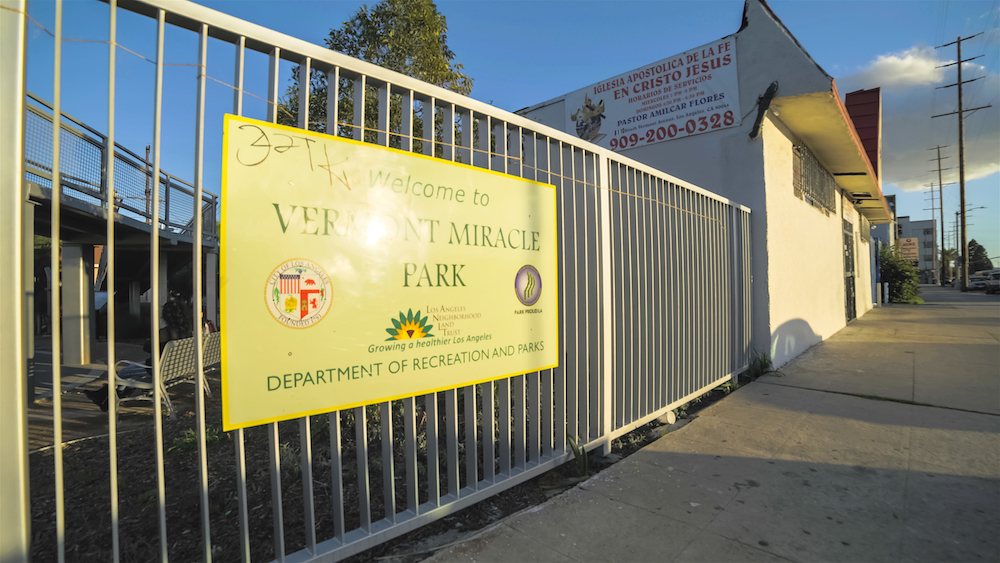 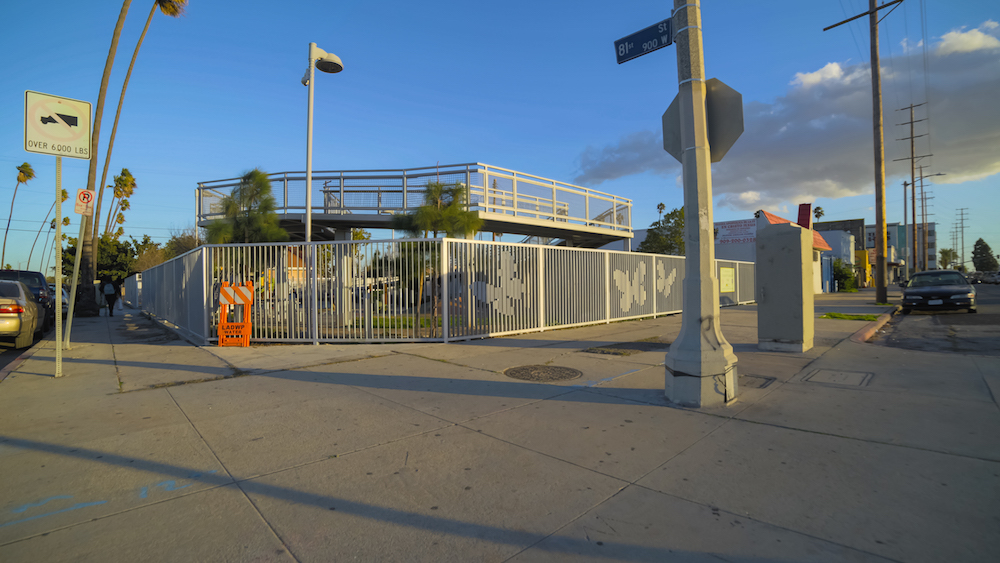 Previous Next
Show More Show Less
About the market

Bungalow Gardens is located in South Los Angeles, which is predominantly improved with single-family homes and small multifamily residential properties. The project is located near the 110 freeway, which connects Downtown Los Angeles to the City of Long Beach, the second biggest city in Los Angeles County. Bungalow Gardens is one half-block from Vermont Boulevard, a key commercial corridor and the second busiest bus corridor in Los Angeles County, with more than 45,000 weekday boardings. Los Angeles Metro Transit Authority is planning a new rapid bus transit along Vermont Boulevard and is expected to begin construction in 2025.

The median sales price of housing in the Bungalow Courts zipcode, 90044, is $423,2000, an increase of 6.1% over the past year and nearly twice the median sales price from November 2013, which was $235,000. South Los Angeles has generally been attracting new investments in housing, although this area falls outside of other high gentrification areas and is still home to lower-income residents of color, who make up about 98% of the population of this ZIP code.

Units in this project will generate $1,522 per month per one-bedroom unit and $1,273 per month per studio unit, both above current market rents. Interested investors can download a recent rent report for more details about local market conditions here. Bungalow Gardens has secured a 15-year commitment (i.e. a five year term with two five-year extensions) for rental subsidy for the project.

The anticipated total development costs of $1,468,018 will be financed with a loan of $868,018 provided by a local Community Development Financial Institution, $100,000 in equity raised through this offering, and $500,000 in proceeds from the county innovation grant.

The land cost for the project is $355,000 and will be funded by county housing innovation grant funds.  If the full goal of $100,000 of equity is not met, the issuer expects to make up any shortfalls in one of three ways: borrow additional funds from the senior lender, defer payment of the acquisition obligation, and/or contribute owner equity. Bungalow Gardens is expected to have a debt service coverage ratio of 1.29 by the fifth year. With rental incomes based on current HUD rents of $1,522 per one-bedroom unit and $1,273 per studio unit per month, managers of Bungalow Gardens anticipate sufficient cash flow to pay investors a 9% annual return. Further, RNLA is planning to refinance the project in Year 5 and return the $100,000 in equity to all project investors.

Financing for the project, if the full offering goal is raised, is anticipated to be as follows:

The developer expects net income, before debt payments, to be approximately $84,429 in the first year, increasing to approximately $92,261 in year five. For more detail you can download the operating proforma here and the development budget here.

The combined goal of these two offerings is $100,000. We plan to use the proceeds of the two offerings together with a loan from Genesis LA, a Community Development Financial Institution (CDFI), a grant from Los Angeles County, and the land, contributed by RNLA, to build 4 freestanding duplexes (8 units in total) and lease them to formerly homeless tenants.

However, we will not complete the Reg CF Offering OR the Reg D offering unless we have raised a total of at least $50,000 (minimum goal) by 11:59 pm. September 20, 2019, EST. If we haven’t, both offerings and all investment commitments will be cancelled, and all committed funds will be returned.

The minimum investment in the Reg CF offering is $500, and the minimum investment in the 506 (c) offering is $5,000. Investments above $500 in the Reg CF offering and above $5,000 in the 506 (c) may be made in $250 increments (e.g., $750 or $5,250, but not $1,136). Investors can cancel their commitment up until 11:59 pm on September 18, 2019 (EST). After that, any funds raised will be released to the Company and Investors will become limited partners of the Company. The Company may decide to change the Offering Deadline but will provide at least five days’ notice of such a change to all Investors. Investors will also be notified and asked to reconfirm their commitment if any other material changes are made to this offering.

Each Investor will receive an annual preferred return of 9% on their investment, beginning 365 days after the proceeds of this offering are invested, which will accumulate but not be compounded. The Company plans to sell or refinance the property in 5 years’ time and anticipates that the valuation of the property at that time will be over $1,318,008. (See “About Investor Return” for a description of the return of equity to Investors)

The full disclosure documents, which include Form C can be downloaded and viewed on the Securities and Exchange Commission’s website.

Under the LLC Agreement, all distributions will be made in the following order of priority, after bank loans have been repaid:

Investor Preferred Return is 9% per annum and payments will begin 365 days after the proceeds of this offering are invested,  It is anticipated that a $1,000 investment would return $1,450 over five years.

A crowdfunding investment involves risk. You should not invest any funds in this offering unless you can afford to lose your entire investment.

In making an investment decision, Investors must rely on their own examination of the Companies and the terms of this offering, including the merits and risks involved. These securities have not been recommended or approved by any federal or state securities commission or regulatory authority. Furthermore, these authorities have not passed upon the accuracy or adequacy of this document. The U.S. Securities and Exchange Commission does not pass upon the merits of any securities offered or the terms of this offering, nor does it pass upon the accuracy or completeness of any offering document or literature related to this offering. These securities are offered under an exemption from registration; however, the U.S. Securities and Exchange Commission has not made an independent determination that these securities are exempt from registration.

There are numerous risks to consider when making an investment such as this one and financial projections are just that - projections. Returns are not guaranteed. Conditions that may affect your investment include unforeseen construction costs, changes in market conditions, and potential disasters that are not covered by insurance. You can download a more expansive list of potential risks here.

Unless otherwise noted, the videos and images on this page are used to convey the personality of the neighborhood in which the Project is planned. Properties shown in these images are not included in this offering and Investors will not receive an interest in any of them.